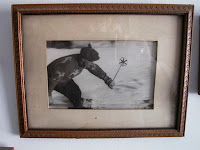 Well we had quite a weekend.

On Friday night , I packed up Eddy Velvet, and trudged off to Miss Pinky’s ranch for the weekend. I was very pleased not to have to put up with the usual formalities upon entering the United States. Many thanks to those that helped this happen.

Friday night was uneventful. We watched “Best in Show” on DVD. More hilarity from the creators of “A Mighty Wind”, and other mockumentaries. A fine time was had by all.

Saturday was Eddy Velvet’s 80th birthday, and it was enjoyed in high fashion with the requisite dancing girls, hookers (just one actually for the birthday boy himself -kidding!), cake, drinks, guests, fireworks, and fanfare. Eddy kept asking whose birthday it was, and was always terribly happy to find it was his own!

On Sunday, we took our house guests and Eddy Velvet up to Mount Baker for a fine day of skiing. For those of you who have never skied at Mount Baker, you owe it to yourselves to try it out. Here is a link to their snow report: http://www.mtbaker.us/snowreport/

Eddy Velvet last went skiing in the Laurentians, north of Montreal, in 1978. He spent most of the next 30 years in the tropics. Despite the fact that he is in a wheelchair, with significant memory loss, he is happy to tell everybody that he is a good skier! It is good that he still believes this. He probably gets as much out of being driven up to the hill, and sitting in the lodge with a bunch of skiers, as he would out of actually skiing himself.

He was all teary-eyed in the lodge all afternoon, saying “I haven’t been to a ski lodge in 30 years!!” I had to keep reminding him that he was actually at the same ski lodge a mere 2 weeks ago. His amazement remained undeterred. After a fine day of skiing, we drove back to the ranch, and promptly fell asleep early after a fine home-made lasagna brought to us by our guests Lois and Allan.

Monday finds me still at Miss Pinky’s place, but will return to the ecopod complex later today.

All hail a weekend well spent.