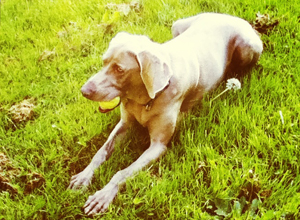 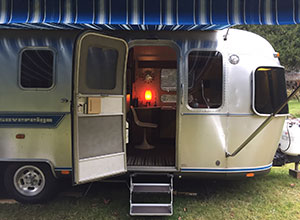 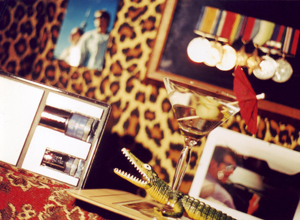 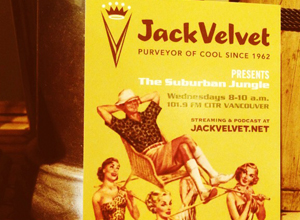 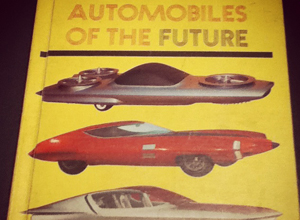 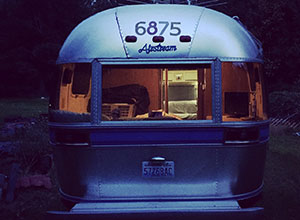 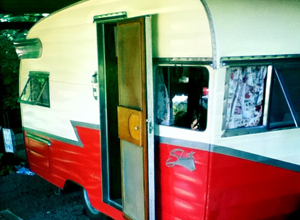 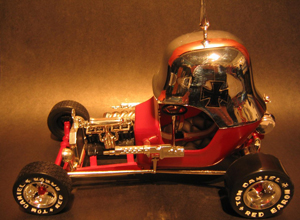 Jack Velvet is a Video Producer, Radio DJ and Blogger, based in Vancouver B.C. He lives in a high tech eco-pod in the Cascade mountain range, the exact location being a tightly guarded secret. He is Chairman and CEO of the Jack Velvet Group of Companies. He is also a noted philanthropist and Executive Director of “The Jack Velvet Home for Unwed Fathers”, a Las Vegas based charitable foundation he established in the late 1980s.

The Suburban Jungle Show with your radio host Jack Velvet is broadcast live from the Jungle Room every Wednesday from 8am to 10am (Pacific Time) at 101.9 FM CITR in Vancouver.

Velvet’s father was the notorious Fashion Designer, arms dealer and reputed spy Eddy Velvet Sr., whose involvement in the 1962 Cuban Missile Crisis and his later orchestration of the 1987 stock market crash led to his eventual incarceration in San Quentin for much of the 1990s. A few of Velvet Sr.’s noted love interests include: Ann Margaret, Catherine Deneuve, Grace Kelly and most notably Mother Theresa. There are rumours of a brief involvement with Wayne Newton, but these are strenuously denied by the entire Velvet family. Eddy Velvet Sr. was the inventor of Hot Pants, and made and lost several fortunes. Velvet’s mother was none other than the esteemed eastern socialite Barbie Velvet (nee Rickenbacker) who was briefly jailed in the late 1980s for tax evasion, and has been linked romantically to the Dalai Lama and Harry Belafonte, though not necessarily at the same time.

Velvet spent the first five years of his life living in New York, London and Paris with his father at the center of numerous high profile international imbroglios. Eddy Velvet Sr. was an incurable gambler and womanizer. At age five, young Jack was orphaned when his father abandoned him in a casino over his crushing gambling debts. The family was broken apart, and Barbie Velvet had to support herself as a showgirl on the Vegas Strip for many years. Velvet Sr. initially fled to Switzerland and later ended up in the South Pacific prior to his later incarceration. Barbie Velvet remained in Las Vegas, where she eventually made a fortune with her fabulous cabaret show “Barbie Velvet – Unzipped”, a nighly feature at The Sahara from 1968 to 1980. Though the entire family were happily reunited many years later, the long time apart affected them all. His parents remain an on again off again presence in Jack’s life.

No sooner was young Jack abandoned in a Las Vegas casino at age five, when in a moment of destiny, his life was irrevocably changed in an instant. Sitting alone in a toilet stall, Jack heard what sounded like a familiar voice from the next stall. “Hey kid, give me some freakin’ toilet paper” said the voice. Familiar yes, but who was it? “Give me some bumwad kid, and you can fly me to the moon!” It was in fact, none other than Frank Sinatra, in a rare moment of need. Young Velvet complied and the rest is show business history. Jack was immediately adopted by the Rat Pack and spent the next five years working his way through elementary school as “Drinks Boy” to the Rat Pack, learning the ins and outs of bartending, show business and Las Vegas.

At age 11, Jack Velvet began his first business venture. He began to publish and distribute “PussyCat Club”, originally a newsletter for Vegas showgirls, but which later morphed into what the precocious Velvet liked to refer as a “Gentlemans Publication”. At age 17, he sold “PussyCat Club”, and bought himself a 45 foot sailboat and headed off to sail around the world with Eddy Velvet Sr. and several showgirls. Unfortunately they were shipwrecked near Tahiti, and Velvet spent the next eight years living on various tropical islands across the south pacific. There he was linked romantically to many young Polynesian girls, and it is rumored that there may be several exotic looking offspring in such far-flung places as The Marquesas, the Tuamotus, Tahiti, the Cook Islands, Fiji, New Caledonia and even New Zealand. Velvet himself is silent on the topic of children, saying only that he “had a very good time in the South Pacific”. He likes to refer to this as his “Gauguin Period”. During this time, through self study and intense personal reflection, he also became an expert dancer, stock investor, race car driver, golfer, surfer, snooker player, and skin diver, as well as finding time to do correspondence courses with The London School of Economics, eventually earning his MBA in International Business Relations.

At age 24, Velvet decided it was time to leave the South Pacific and return to what he laughingly refers to as “civilization”. In 1985, he combined his twin loves of dancing and high finance, by establishing “The Jack Velvet School of Interpretive Dance and International Finance” in Zurich Switzerland. From 1988 to 1993 he worked as a consultant in the oil business in Saudi Arabia. From 1994 to 1997 he worked in New York as an Investment Banker, and then in 1998, he established “the Jack Velvet Group of Companies” the Video Production and retail empire which continue to this day.

Other skills of note include marksmanship, and bartending. In fact, Jack Velvet has shown remarkable ability with handguns and drink mixing since an early age. He was the 1968 Boys Las Vegas Summer Camp champion with a his record times in the Quick Draw Gin and Tonic event with a 9mm Berretta pistol.

As a service to all of mankind, Jack Velvet broadcasts his world famous radio program “The Suburban Jungle Show” at 101.9 FM in Vancouver, Wednesday mornings from 8:00 to 10:00 am Pacific time, live from “The Jungle Room” located at his EcoPod somewhere high in the Cascade mountains.

Get In Touch with Jack Velvet!